It’s funny how the summer days float by. The house has been practically bursting with people for weeks now and I haven’t found the space to write about our many beach trips, but August still feels like a lazy month.

It reminds me of my childhood summers; a jumble of paddling, swimming, rockpooling and finds. Only I’ve just turned 40 and now I’m the one remembering hats and towels, preparing picnics and being called on constantly to help build dams or identify creatures. Every few days I realise that I’ve failed to take many photos and still haven’t blogged anything I’ve found. It’s just the way August goes.

The warm waters are drawing in all sorts of creatures at the moment. The north coast especially is teeming with jellyfish. Harmless Moon jellyfish have washed up in their thousands. These transparent little jellies have four mauve circles in their centre in a pattern that reminds me of cucumber slices (OK, that’s probably just me).

Other jellyfish that have mild stings, like the compass jellyfish are also washing in and I think my thigh met with one of the many blue jellies in the water at Mawgan Porth a couple of weeks ago from the unattractive rash I developed! On the plus side, some friends found a spiny starfish in a pool at the top of the mid-shore pools, which looked like it might be feeding on the stranded jellies.

Rockpooling conditions have been mixed, with some strong winds and showers about, but we’ve had some productive forays around the south coast. The crabs were a highlight for the children. We found a large edible crab wedged in a crevice

The kids especially enjoyed seeing this hairy crab. These small crabs have one claw bigger than the other and are covered all over in tufts of hair.

I was pleased to spot this handsome Greater pipefish swimming among the seaweed at my local beach. I was able to watch it for some while as it floated, unmoving, relying on its camouflage. The incredible long snout and the snake-like body make this fish the closest thing we have to dragons in the Cornish rock pools. When I hold it, it wraps itself around my arm to try to frighten me off. After a minute I let it go and in a second it has disappeared among the kelp.

As the tide rose around me I noticed two stalked jellies (Haliclystus octoradiatus) among the weed. The current was making them sway about and stirring up the silt, but this photo at least shows their characteristic eight tentacles arms with small button-like secondary tentacles in-between.

August is far from over and, in addition to generally lazing on beaches over the next few weeks, I shall make the most of the upcoming spring tides and kick myself into action to take more photos to share. 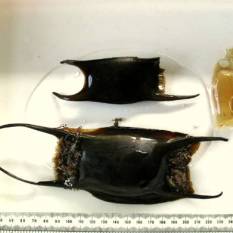 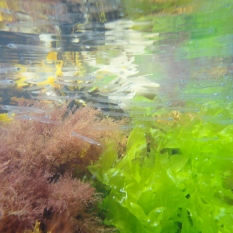 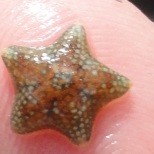 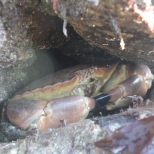 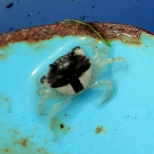 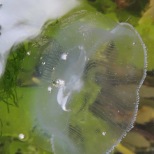 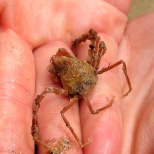