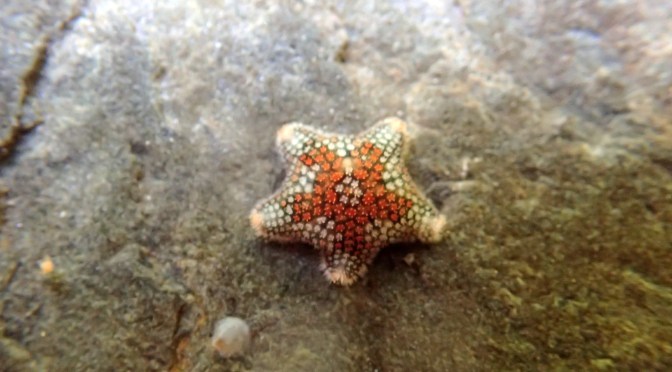 It’s a while since we did evening rockpooling, but the days are lengthening again and there’s something satisfying about reaching the beach just as the daytime crowds are melting away. We meet friends in Looe and explore rocks just beyond the main beach.

The tide’s not especially low so we have no expectation of finding much. Cornish Rock Pools junior and his friends scale rocks and leap across gullies, stopping occasionally to examine anemones and watch hermit crabs emerging.

I sit and stare into a deep pool that’s lined with pink coral weed, running my fingers through to see what lives there. Below the surface the water temperature drops away, providing a constant cool environment for the pool’s inhabitants.

It’s hard to make out if it’s really there or not, but my eyes think they see a minute star shape among the coralline weed. I trawl my fingers through the weed a couple of times before I think I’ve honed in. Sure enough, I lift an Asterina phylactica starfish from the water. It looks like a baby next to the cushion star in my bucket, but it’s a fully grown adult.

I’ve only found this species in a few pools around the south coast before. This is a new location. Small species like this are often under-recorded and may be more common than they seem. I tend to find them in these cool pools with plenty of pink weed to hide in, so I’m going to make a point of looking for them on all my rockpooling forays this year.

My sharp-eyed other half announces he’s found a flat fish at the same instant that Junior announces he needs the toilet. I grab the big bucket and offer to catch the fish while Junior goes for a walk with his dad.

Flat fish have near-perfect camouflage against the sand, rocks and weed. They also like to part-bury themselves in the sea bed to maximise the effect. I creep forwards from the seaward end of the rocky gully, treading slowly and lifting seaweed, hoping that if I disturb the fish, I’ll flush it into shallower water where it’s easier to catch. Flat fish are nippy swimmers so I have little chance of finding or catching the thing, but it’s fun to try.

As I look into some kelp, I see a change in the texture of the sand. I move the seaweed a fraction and there it is. The fish is facing up the gully, so I place the bucket ahead of it, scooping it forwards at the same time as stroking the fish’s tail.

For the first time ever, the technique works and the fish swims straight into the bucket.

I expect it to be a topknot, the most common flatfish on the shore, which can cling to the underside of rocks, but this fish has bright orange spots. It’s a plaice (Pleuronectes platessa); only a small one, but it doesn’t have much room to move in the bucket.

We keep it until the boys come back from their walk. The children take turns to touch the plaice’s back, discovering it to be smooth and a little slimy. The older boy walks down to the gully with me and releases the fish into the rising tide. It slides out and is gone in an instant, invisible once more among the weed and sand.

For a mediocre tide, it’s a productive evening and with the summer still young, there should be plenty more evening forays to come this year. 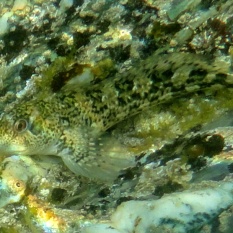 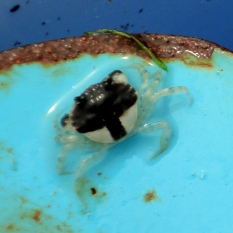 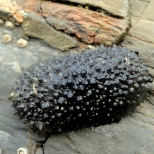 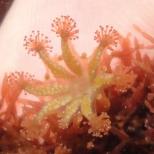